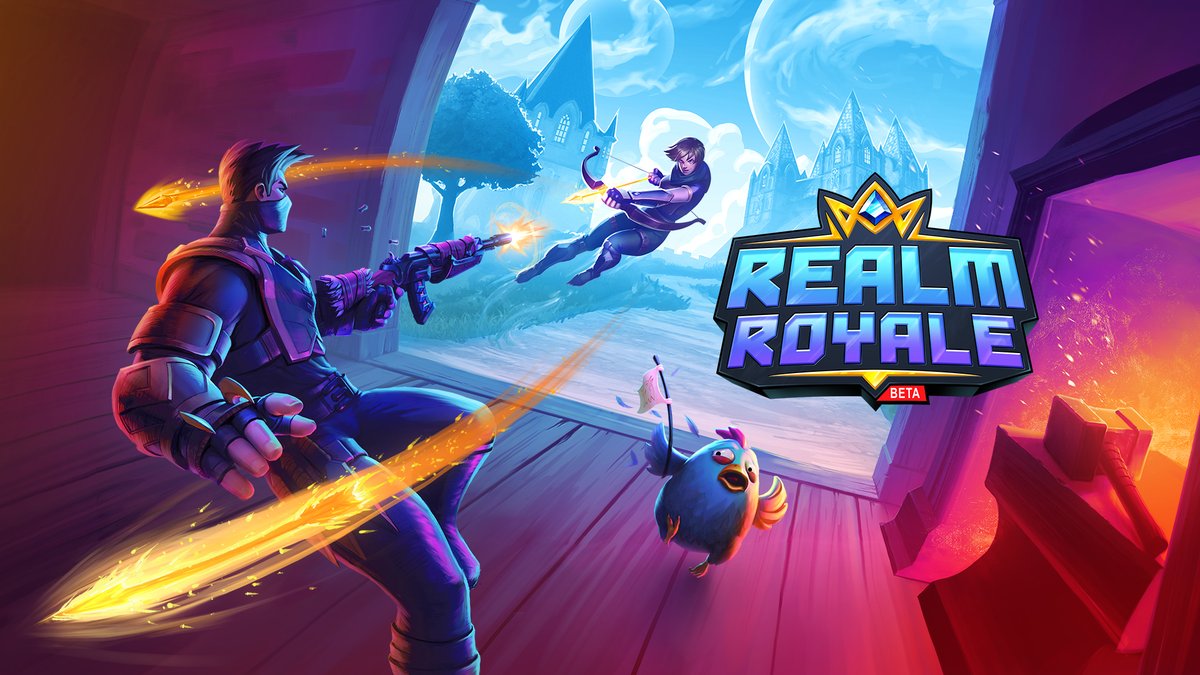 Realm Royale , the newcomer to the world of battle royale, tries to distinguish his gameplay from the rest of the market with influences and ideas taken equal from the world of RPGs. Among the characteristics derived from the world of role-playing games we find the choice of class, something that must be done during the pre-match and that has the potential to change the outcome of the same.

We'll show you what five classes are available in the game so far, how to play them best and how to get the most out of each one. Each class will be equipped with unique skills, unique legendary weapons and non-replaceable passive skills. Let's see together what they are and how to make the most of every gram of the class we choose.

Engineer passively gains 5 armor points per second. This passive allows the player to do without the dedicated potions and allows the passage of time to heal his wounds by progressively increasing the current armor, even during the course of battles.

The class of the engineer focuses primarily on the use of the turret.
Throwing Axe is a skill that can damage one opponent at a time quickly; damage is limited but it allows you to slowly smooth out your opponent's waist and armor. It also serves to improve our fortifications or improvised barricades, barricades that we will make using another of our skills.

This strategy is pretty obvious: pull a barricade and place a turret to create a continuous source of damage without too much chance of being damaged. The best way to use this build is to focus your war effort on the forges, and defend your position strenuously. The presence of a well defended turret will force opposing players to take alternative routes that can be covered with bullets from our main weapons.

The Fire Bomb is a very strong ability, able to do a considerable amount of damage in the second between the impact damage and the damage in time of the flames. The barricade, of course, allows the player to avoid taking damage from opposing bullets. By mixing these two skills you can create bottlenecks to exploit with team bypasses and pincer strategies.

The legendary weapon of the engineer is the Plasma Launcher, a really interesting tool that can do a lot of damage in a few seconds and is also equipped with an interesting splash damage to match the fire bomb. The weapon does 800 direct hit damage and 400 splash damage. The splash damage has a rather limited area of effect but still large enough to hit an enemy behind a wall; to do this just aim at the angle visible to the player and hope that our opponent is in the immediate vicinity of the corner itself.

Plasma Launcher doesn't have a great range of fire and its bullets quickly follow a descending parable. It is a weapon suitable for close-range or mid-range combat at most.

Tips for using the engineer.

Here are some general tips to make the best use of the enginner and his skills.

The hunter passively has a 10% increase in reload speed and the speed at which they exchange their weapons. Of all the passive ones this is probably the least useful because the playstyle of the class is based on the use of the Longbow and a few precise shots, especially during the last stages of the game.

The hunter is a class dedicated to guerrilla-like combat with rapid movements and lethal attacks.

The Blast Shot is able to do a good amount of damage in a small area while the Withdraw is the perfect ability to escape from really dangerous situations; using the withdraw it's good to remember that it remains possible to shoot while you're invisible, so you can finish off previously weakened enemies.

The longbow is currently one of the best weapons in the game due to the very high damage output. Loading it to the minimum will do more than 500 damage, while the loaded shot to the maximum is capable of up to 1000 damage.

In this way you can weaken your opponent with light strokes and then finish him off with a nice loaded shot. The weapon is effective in virtually the same way from all distances and is the recommended weapon for any self-respecting hunter.

Tips for using the hunter.

The killer's passive ability is 10% faster when walking on the ground. This means that your character runs a little faster than the others, nothing transcendental.

The concussion bomb is great at throwing enemies in the air; throwing it predicting the movements of the opponents will be possible to throw them into the ether with predictable trajectories; trajectories that can be exploited by the legendary sniper rifle to inflict huge amounts of damage without our opponent has much to say. The Ghost Walk is our ticket to escape from prison without paying a lien.

This build is suitable for all players who want to get to the end of the game by firing as few shots as possible. Both skills chosen here are extremely useful to escape undisturbed without taking too much risk.

The assassin's legendary sniper rifle is an excellent weapon. Although it is not hitscan but is equipped with ballistics, the bullet (unlike those that happens in Fortnite) travels quite fast and is able to hit your opponent in a reasonable time.

If you manage to take a headshot with this weapon, normally, thanks to its huge damage you'll bring home a virtually insured kill. Its best value, however, is its remarkable accuracy even when you don't use the scope.

When you find yourself using it during close combat, rather than switching weapons and wasting time, you take out a few sniper shots and show your opponent who's in charge.

With the last patch it is impossible to one-shot an opponent with full-set legendary armor.

Tips for using the assassin.

The wizard's passive ability increases the effectiveness of potions by 30%; this way it drinks concoctions instantly and slows down enemies for a few seconds. Great for helping yourself with a few kills and perfectly capable of creating real slaughterhouses by playing in pairs or squads.

This build is made to destroy your opponents in the shortest possible time; finishing their last hp by firing a few shots or with a few swords. The combination of offensive skills makes the wizard a real glass cannon, without there being any defensive skills somewhere to save the frittata.

This build is made for those who want to dictate the pace of their fights; the ice block is used to waste time while their teammates do some damage while the fireball is used to bring down the toughest and most daring opponents. If you're in a duo or a squad, it's definitely the build you prefer.

Stone Spear looks like a bad weapon in statistics and in practice it is. Although each bullet is capable of doing 300 damage on impact they're not hitscan and have a descending parabola trajectory that makes it really complicated. Among the various legendary weapons this is certainly one of the worst.

The weapon's very limited range makes it useless for close-quarters combat, and with one of the latest patches the bullet velocity of this weapon has been dramatically increased.
Once at the forge better hope for legendary skill and throw fireballs at everything go.

Tips for using the mage.

The warrior's passive ability allows him to gain five life points per second. It's a solid skill that can help less attentive players during their first games with a constant amount of extra HP per fight.

The charge allows the player to quickly approach his opponent and do damage with the weapon of his choice, while the shield potion allows this strategy to be transformed into something just a little more resistant than the classic glass cannon strat. This build is indicated if you choose to use the warrior's legendary weapon as a weapon.

This build, all focused on the support of your classmates and your position doesn't particularly honor the class name but it works. The skill pair that can extend your life is recommended for duo or squad matches.

The legendary weapon of the warrior is one of the best choices you can make when you find yourself in front of the forge. Although their range is not of the best the excellent rate of fire mixed with the unique skills of the Warrior class allow this weapon to be completely lethal, also thanks to a hitbox a bit 'lascivious that lets in shots otherwise pulled a bit 'in the air. Three shots and pretty much anything dies; that's it.

Tips for using the warrior.

My Name is Mayo Trophy Guide

Add a comment from Realm Royale Guide - Which Class to Choose