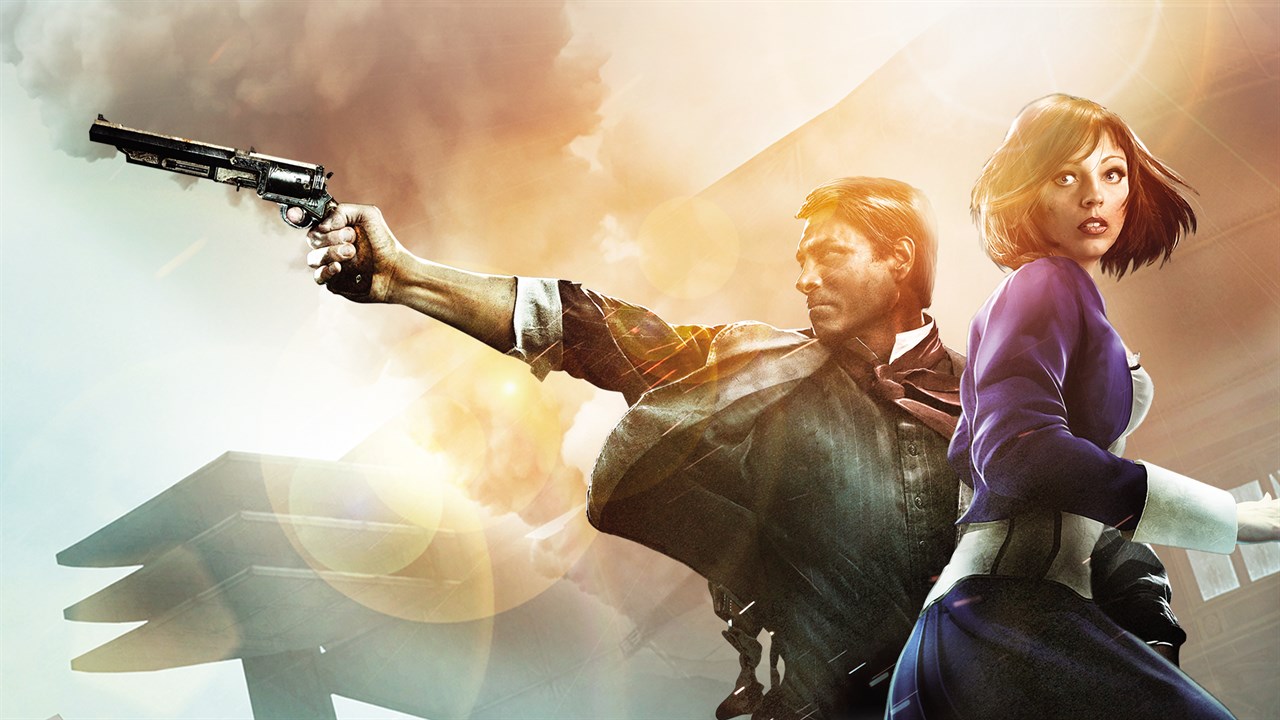 In this section of the guide you can discover where to find all 80 Voxophone, special recorders, which will help you to deepen the character of the characters. In addition, by collecting them all you will unlock the SPIONE trophy / achievement.

SECTION 1 - THE LIGHTHOUSE
There are no collectibles.

SECTION 2 - RECEPTION CENTRE
-When you arrive with the rocket, go down the stairs and enter the church on the left. You will notice a small cave to the left of the altar where you can pick up the Voxaphone.

-In Hudson's Boutique, look behind the counter, near the safe.
-Pick up the steps in front of the Groucery to find yourself in the spot in the photo. Reach the garden at the end to find the voxophone on a table.

-After you flip the coin, go ahead and look under a statue of a woman to your right.

SECTION 3 - LOTTERY SQUARE
-After the lottery look on the table between the 2 cages near the Dollar Bill.

SECTION 4 - COMSTOCK CENTER ROOFS
-In the kitchen of the restaurant where you'll get the magnetic shield.
-During rooftop combat, break through one of the pyramid-shaped windows and descend into the house below. Go down to the room downstairs to find the voxophone.
-Go out of the Montgomery residence, look in the center of the area for a stage. The voxophone is on the table under the bear.
-In the main church inside the fraternity, on a bench.

-On the bar counter in the crow fraternity. -Oh... Just past the left.

-In the brotherhood of crows, use the elevator and reach the circular hall with the projector. Enter the room on the left and look at the desk to find it.

SECTION 5 - MONUMENT ISLAND ENTRANCE
-After taking the Skyline with the hook, for the first time, you'll have to go down to get rid of the crates that block your way. Look in the right room to find the voxophone on a desk.

SECTION 6 - MONUMENT TOWER
-Get to Monument Island, look in the locker shown in the picture. -Mm-hmm.

-Go over the 3 levers and enter the room on the left shown in the picture. The voxophone is on the desk.

-On the desk in the middle of the 2 staircases, in the room with the big machine that emits electricity.

-In the third observation point of the girl, on a chair.

SECTION 7 - BATTLESHIP BAY
-Once you're on the bay, look under the red and white cart.

- Once you pass the bay you will meet an orderly who cleans on the ground, pass him to find yourself in a corridor with a door at the end. Enter to find the voxophone inside a wicker basket.


-In the white male bathroom in the rec room.

SECTION 8 - SOLDIER'S FIELD
-Have Elizabeth break down the door on the left, right at the start area. -Mm-hmm. You'll find the voxophone inside, inside a cabinet at the back.

-On the table in the ice cream store, at the park gates. -Oh, yeah.

-In the spot shown in the photo, inside the library near the Duke and the imbecile's little theatre.

-Pick up the door shown in the photo near the spot where you'll catch the crazy horse. You will find the voxophone on a desk inside.

-In the square with the enemies, enter the saloon on the left to find the voxophone in the kitchen.

-OPTIONAL MISSION- In the square with the enemies, enter the building on the left and take the cipher from the mouth of the cannon. Then enter the saloon to the right of the square and enter the first bathroom to translate the red writing on the wall. Now enter the second bathroom and pull the hat from the picture. Go down to the secret basement to find the voxophone.

-In the square with the enemies, go up to the upper floor of the right building to find the voxophone where shown.

-Go to the top with the Skyline and before you go up the stairs, go down and look in the back of the red shuttle.

SECTION 9 - HALL OF HEROES
-As soon as you enter, go in the corridor on the left and enter the door to find the voxophone on a desk.
-Go to the wing of the Prophet's story, when his wife is murdered, look in the chair in the room on the right.
-When you arrive in the area where you will have to fight with Slate, who will throw you the electric traps from a balcony, enter the door on the lower left which was previously closed. You will find the voxophone on the desk.

SECTION 10 - RETURN TO THE SQUARE OF THE HALL OF HEROES
-Get back to Soldier's Field, go up to the spot shown in the picture and use the electric trap to open the door. You will find the voxophone on the bed.

SECTION 11 - FINKTON PIER
-Look behind the desks on the left after Elizabeth's capture. -I don't think so.

SECTION 12- FINKTON CENTER
-in the central room at the employment office at the beginning of the chapter.
-Before you take the elevator, look in the green locker in the picture. -I don't know.

-On the table in the anteroom just before entering the armory.
-In the central square of Fink Industries, where you can access the armory and Good Time, look in the right-most corner of the square to find the voxophone where it is shown.

SECTION 13- THE GOOD TIME
-Before you go under the stage, look in the back dressing rooms. -I don't know.

-OPTIONAL MISSION-This collectible is located in FINKTON CENTRE but you will first have to go down into the basement of the GOOD TIME and take the cipher that is on a crate in the second room with the enemies under the stage.

Now go back to Finkton Centro and go to the left corner of the entrance to PIAZZA DELLO ZELO.

You'll arrive on a wooden pier where you'll have to break in a door. When you enter the watchmaker's shop, use the cipher to translate the symbols on the wall and find out how to set the hands in the big clock next to it. The voxophone is in the safe.

-In the basement under the stage, past the room with the projector in the middle, look in the chair on the right.

SECTION 14- SHANTYTOWN
-Gather in the cellar of the Graveyard Shift, the bar at the beginning of the chapter to find the voxophone on the table.
-In the police yards, take the Skyline higher up and go down over the building with the rocket launcher. The Voxaphone is in the back.

SECTION 15- POLICE STATION DEPOT
-In the large hall with the enemies, go upstairs and enter the offices on the left to find the voxophone on a desk next to a blue trunk.

-After you jump into the gash, examine the desk just outside the basement where you opened the gash.
-From the previous voxophone, go up the left stairs and inspect the desk shown in the photo.

SECTION 16- SHANTYTOWN AND FINKTON CENTER AFTER THE GASH IN THE POLICE STATION
-Go to the Graveyard Shift, the bar at the beginning of Shantytown to notice 3 men taking the picture over a fallen Handyman holding a voxophone in his hands.
-On the counter at the Graveyard Shift bar.
-In Finkton's armory downtown near the Lin Corps.

SECTION 17- THE FACTORY
-Get out of the elevator, look at the spot shown in the photo.

-After you see the end of the Fitzroy, go to the door on the right before you get on the blimp.

SECTION 18- EMPORIA
-After you take the red shuttle, continue until you find a corridor with windows. You will arrive at the one shown in the photo to collect the voxophone.

-In the big room with the 3 Tesla spirals. Enter the ticket office on the left and look in the only door.
-Just before using the final turnstile, pick the lock on the right to access the library and find a voxophone upstairs and one down.
-OPTIONAL MISSION-When you take the Voxaphone on the lower floor of the bookshop, you will discover that at The Salty Oyster ( the restaurant you should have already burgled in this section ) there is a secret button under the cash desk. When you press the button, enter the room that will open and pick up the voxophone from the hollow along with the Vigor Return to sender.

SECTION 19- EMPORIA CENTER
-After the clash with the Handyman, go up to the upper balcony and break down the door. The voxophone is between the boxes just opened.
-When you get to the merchant quarter, you'll see the road crumble. Jump into the building shown in the picture to find the voxophone on the piano.

-When you get to Harmony Lane, cross the bridge and enter the club on the right. Take out the enemies and take the voxophone between the barrels.
-When you get to Downtown, go up the stairs on the left. Now go straight ahead until you see a shop on the left. Break into it and take the voxophone from the table.
-On the steps in front of the house of the prophet, behind the praying statue.
-Upstairs in the Lutece lab, look by the bed.
-In the room to the right of the gash, in the Lutece lab.
-On the ground, after opening the gash in the Lutece lab.
-On the table, after opening the gash from the photographer.

SECTION 20- THE BANK
-OPTIONAL MISSION-Before you can take this voxophon, you must enter the business district from the point where you also enter the bank. And go down to the foundations of the house, right in front of the district entrance, to take the cipher. Now enter the bank and continue until you are in front of the huge security door. Go to the left and continue to the end, have the sign shown translated into photos and you will have access to the secret vault.

-Go into the room to the left of the gash and look behind the safe at the back.
-under the statues of angels, after opening the gash.

SECTION 21- HOUSE OF COMSTOCK
-In the elevator.
-Into the crematorium, in a coffin. -Oh...
-In the room with the sentinel in the middle, look behind the big beam at the back.
-Before you go up to the office with the screens, look to the right in the area below them.
-In front of the 3 screens.
-In the elevator, coming down.
-After you save Elizabeth from the doctors, you break down the back door in front of the elevator.

SECTION 22- THE HAND OF THE PROPHET
-After the long rooftop fight, cross the bridge and burglarize the door. The voxophone is in the room on the right.
-In the second deck, break down the door shown in the picture. -Mm-hmm.

Audio Video Bioshock Infinite : Locations Voxophone Guide
Do you want to know all the tricks and guides for your video games? Videogamestricks.com is a group of video game fans who want to inform you about the best tricks, secrets or advice. We offer quality content to be a source of useful information, so here you can find guides, tricks, secrets and advice so that you can play without any problem. Are you ready to get what you want? Enter and enjoy your video game to the fullest!
AC 3 - Guide to Scores and Progress in Multiplayer ❯

Destiny 2 | Guide How to get the Exotic Weapon Rat King

Vampyr - All the Trophies and Achievements Guide